I am a maker, someone who develops work through thinking and making and feeling. I gave this title to this piece of writing because it seemed to describe the process of being creative.

It suggests a physical process and a sense that something is to be won from the ground of creativity, but that nothing is sure and safe.

I lived in Birmingham up to the age of eighteen when I began my Art training with a foundation course in Stoke-on-Trent. Both cities were industrial and had flourished with the Industrial Revolution’s effect on manufacturing in the eighteenth and nineteenth centuries.

Birmingham was famous for guns, metalworking and jewellery, then later motorbike and car production. Stoke on Trent is a pottery city, which grew because of its local resources of coal and clay necessary for ceramic production.

Birmingham was at that time busy rebuilding itself in the modernist architectural style. Stoke was a city blackened by hundreds of years of firing kilns and scarred with the debris of abandoned kilns and potteries yet still a place with pride, understanding of ceramics and great skill.

Unlike some European countries, which encouraged and supported artists to work alongside mass production Stoke seemed to offer little to the artist designer perhaps because it had large markets for traditional wares in the UK and North America. Much of its mass produced ceramics are now produced in areas in the world with cheaper production costs leaving a city to redefine itself, rather like Yingge.

My next three years at the Central School in London (now Central and St Martins) was focussed on Studio ceramics and Art. Some of my contemporaries moved to the countryside and set up potteries, I stayed in the city and tried my hand at thrown productions, jewellery, and interior design. I also taught part time in Art schools, a decision that allowed me to develop and change, indeed it was expected that lecturers engaged in research. 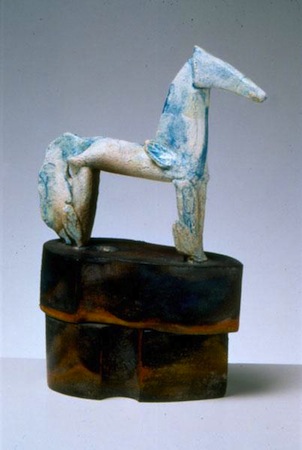 An important influence on my sculptural work was working with Raku firings. Raku in the Western mode could give a sculptural surface, which was an all over experience and allowed a way of working that exploited imperfections and chance effects. For me at least Raku was not about repetition but change, transformation and experiment.


This was gallery work supported by opportunities to exhibit bodies of work. It was through my contact with Raku, both Western and Japanese, that I was introduced to the significance of utilitarian objects as a mode of interaction and communication. The cloak of utilitarianism was a useful screen, it could allow direct access to work that which although seemingly familiar had new meanings.

This figurative period of my work often used the bowl or pot plus figures, horses as an arena to explore feelings and associations. The image of the horse and rider was a play with composition and surface. As forms became dominant over narrative a change of surface became vital, also how the work was made had to evolve.

The work seemed now more about light and shadow than solid existence, it felt that I was destroying my work. 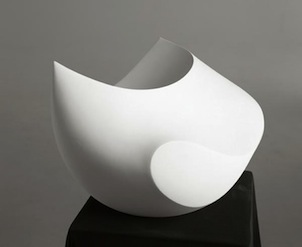 The making of the pieces gradually evolved into a series of stages, sometimes working in clay, then plaster, positive then negative and recombining both positive and negative. I also questioned whether the work should finally be in ceramic to work as an art piece. So far the answer has been yes because they became subtler more refined in clay.

At the moment I am absorbing the work I made at the residency in Yingge. My personal remit for the residency was to question my modes of making, glazing finishing and firing and what I thought was acceptable to me aesthetically. 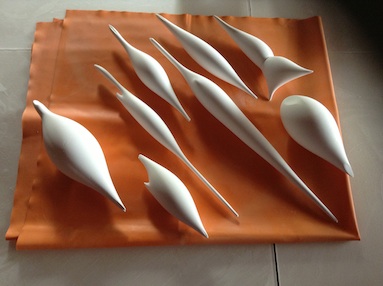 The work had to be made fast with decisions also being taken quickly based on the number of firings and material outcomes possible in the time. The resultant forms were made inside rubber skins, inflated, pressurized, distorted tensioned and altered.

Again the question, should these pieces be made in ceramic faced me. After all the work had started with pressure and expansion: firing would shrink things. When I fired work it actually sharpened up under the compression.

I found that having freedom to develop work emotively was constantly challenging me. The work I made is a dialogue of thinking and making and intuitive grouping.

Yingge provided a concentrated physical and mental space for activity for me, mostly without distractions or interference. Although I was asked by one visitor “where is your masterpiece”? It created an opportunity to document a dialogue of thought and making.

I felt genuine support for an open-ended result to the residency and its effects are ongoing; the museum will receive visual updates of the continuing outcomes as part of my contribution to the residency.

I enjoyed my lecturing and teaching plus firing demonstrations and I was challenged then ultimately amused by teaching seventy small students to make ceramic oil lamps.

The museum in Yingge is a unique world resource for tourists and all the people who live in Taiwan and provides a high quality experience of ceramic history and international developments in the fields of art and technical ceramics.

This museum has to function in many ways to remain vital in a fast changing world and I think that its flexibility and openness to change will be the key to its future success and to the developments of individual artists work on the residency programme.